Posted on February 4, 2019 by canadianbooklady

We’re really pleased to be carrying four books just released by local author, S. L. Dickson. Shaa was a member of the writing group that used to meet at Elizabeth Campbell Books, one of six of us to finally see our names in print and on bookshelves… well, we hope everywhere.

For several years, Dickson has been wooing Harlequin Publishing, building a strong backlist of romance titles in hopes of becoming one of their stable of writers. They’ve been very encouraging, but as yet she has been disappointed in terms of actually seeing one of her titles published. With the list of titles growing in her file drawer of manuscripts, she decided to take the plunge and self-publish. She’s done it forcefully by releasing four titles all at once!

Each novel stands alone, although there is a very loose connection between characters from book to book. They’re homey contemporary romances with strong Western Canadian content. The one I’ve had a chance to read, Kirk’s Promise, has a bit of a Heartland (CBC TV) feel to it. It begins in Southeastern Manitoba and takes its readers out to the Albertan Foothills, and illustrates the contrast between the ranching life and city living.

Dickson’s characters are young people beginning to make their mark on the world, caught up in the challenges of finding their way to success in life, albeit not necessarily the particular form of success they had initially envisioned. Reading Kirk’s Promise, I thought it would make a fun, light read for young women who are at that same stage in their lives – starting out fresh from high school or university. 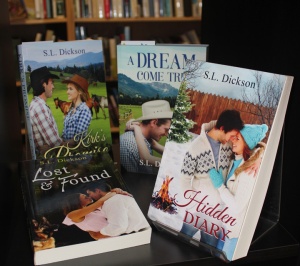