Posted on October 5, 2017 by canadianbooklady 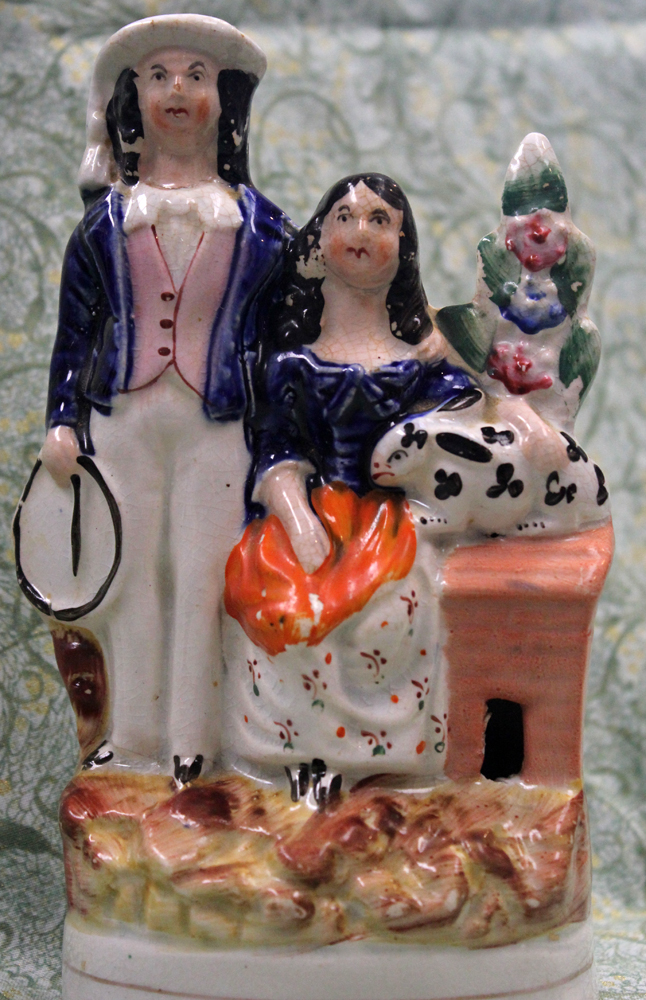 One of the most common ways to dress up a Victorian fireplace mantel – you know, brighten it up a bit with some colour! – was to plant a few ‘flatbacks’ against it. Made in the famous pottery belt of Staffordshire, England, these figures often depicted the Royals or other prominent members of society, or alluded to current events in some way. You’ll notice when you look through our gallery for this one, that they were somewhat naively painted and that the backs were left unpainted. The backs were always up against a wall, so there really was no point investing the labour to make them beautiful. As for the primitive portraiture… well, flatbacks were usually painted by children. Remember from your high school English reading list that in these Dickensian times, children were put to work at an early age, for a variety of reasons.

The cobalt blue colour could be fired at high temperature as an underglaze, but the other colours would be added later over the glaze. Later figurines of this type used the overglaze style of painting to save on production costs (fewer firings in the kiln).

One of the date indicators on this piece is the use of cobalt blue, and another is the type of gold used on the line around the base. We know the piece is not a reproduction because of the placement of the vent hole, cleverly disguised as the door to the rabbit’s hutch. Reproductions typically have a larger hole in the base. Reproductions are quite common, especially of the Staffordshire dogs, which have always been popular.

Staffordshire Flatback Figurine of Sailor and his Sweetheart and a Rabbit, ca. 1840-1860. Some paint loss, some crazing to glaze from faces up, porcelain is free of any damage. $75.00